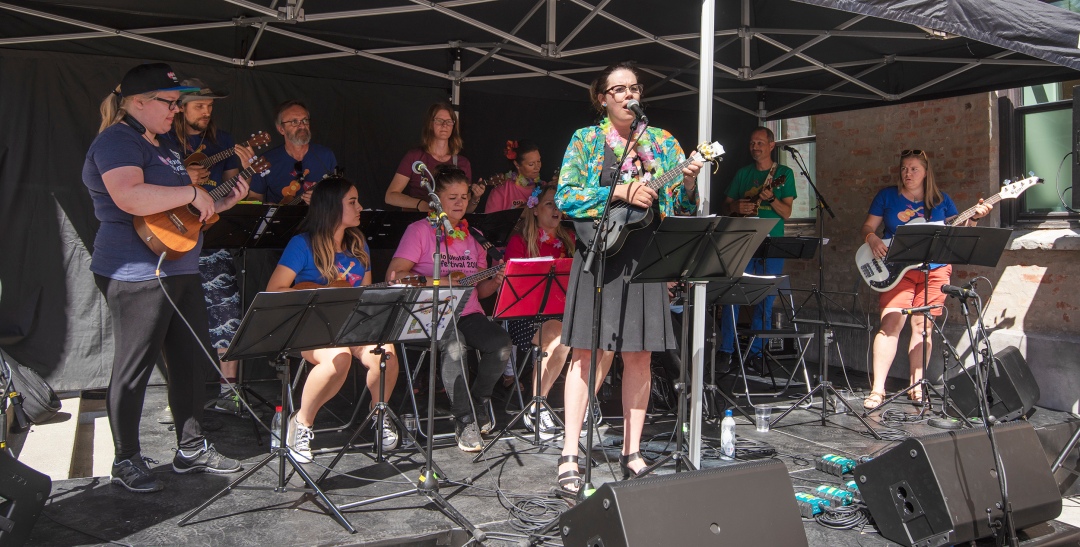 Inflatable plastic parrots and pink flamingo pool toys adorned a small, hidden courtyard in an Oslo business park on a recent Saturday in June. Nearly 100 people, many wearing bright Hawaiian leis, sat drinking beer, smiling, eating pastry, and listening to music. An orchestra of string instruments performed classics by Nancy Sinatra and the Rolling Stones. However, the renditions of “These Boots Were Made For Walking” and “Honky Tonk Woman” had a higher pitch and lighter tone than expected. That’s because these songs were being played on the ukulele and the lyrics were sung in Norwegian.

Stine Lindset, herself a ukulele player, organized the first Oslo Ukulele Festival in 2017. She took her first ukulele class in 2011 while a music education student. “I started playing ukulele, and I understood that learning ukulele was a fast way into learning music,” Stine said. “So I wanted to start courses so people could start playing music themselves, quick and easy, and have that joy.”

Which is what led to Lindset starting a ukulele orchestra in 2015. As the Oslo Ukuleleorkester’s popularity grew, Lindset wanted to share this music with others and bring together ukulele artists from around the city. “Then, last year, I thought, ‘Why don’t we make a ukulele festival?’ because there are a lot of groups, not only us, a lot of groups around the place, and we don’t have anything to collect us all.”

This year marked the second Ukulele Festival, with 30 volunteers showing up in the morning to set up. Christian Valentiner, the festival co-chair and another ukulele fan, described the planning process. “So we started in August, planning for this year,” he said. “Even as the festival is going we are planning for next year, because we are learning that we have to do it early. It’s a really steep learning curve for us.”

The greatly increased number of volunteers was a welcome change from last year, he said. “Last year we did everything ourselves, including sound and food, etc. With volunteers it helps with a lot of the tasks. And this year we’ve hired professionals for the sound, because that’s one task you really want to outsource.”

Festival volunteer Finn Bjerke is very fond of the ukulele as an instrument. “It’s like a mini-guitar, but it does a lot of things a guitar can’t.” Bjerke proudly displayed his prized plastic ukulele, made by a company in Bend, Oregon. He said it’s perfect for traveling and allows him to play whenever and wherever he wants – even in the bathtub. He is excited about the upsurge of interest in the instrument.”You have the ukulele revival that came out of the U.S. It provides a sort of anti-guitar, said Bjerke. “You have people in Sweden, in Japan, all getting involved in it. It’s become a global trend.”

For Lindset, the event offers a chance for her to show her appreciation for the ukulele. “I think the ukulele is such a pure instrument. When you play the ukulele you can’t hide anything. It’s a really honest instrument.”

Video below: Backed by the Oslo Ukuleleorkester, Åse Kleveland performs her rendition of the Tin Pan Alley classic “Ain’t She Sweet” on the ukulele and kazoo. Kleveland is a well-known Norwegian singer, guitarist, politician and activist. She has served as Norway’s Minister of Culture, president of the Film Institute, and Chairman of the Board of Human-Etisk Forbund, a humanist organization.

My name is Ethan Reddish, and I'm currently studying Writing and Communication at ABAC. This trip to Norway is my first time out of the country, and I look forward to reporting here. View all posts by ethanreddish