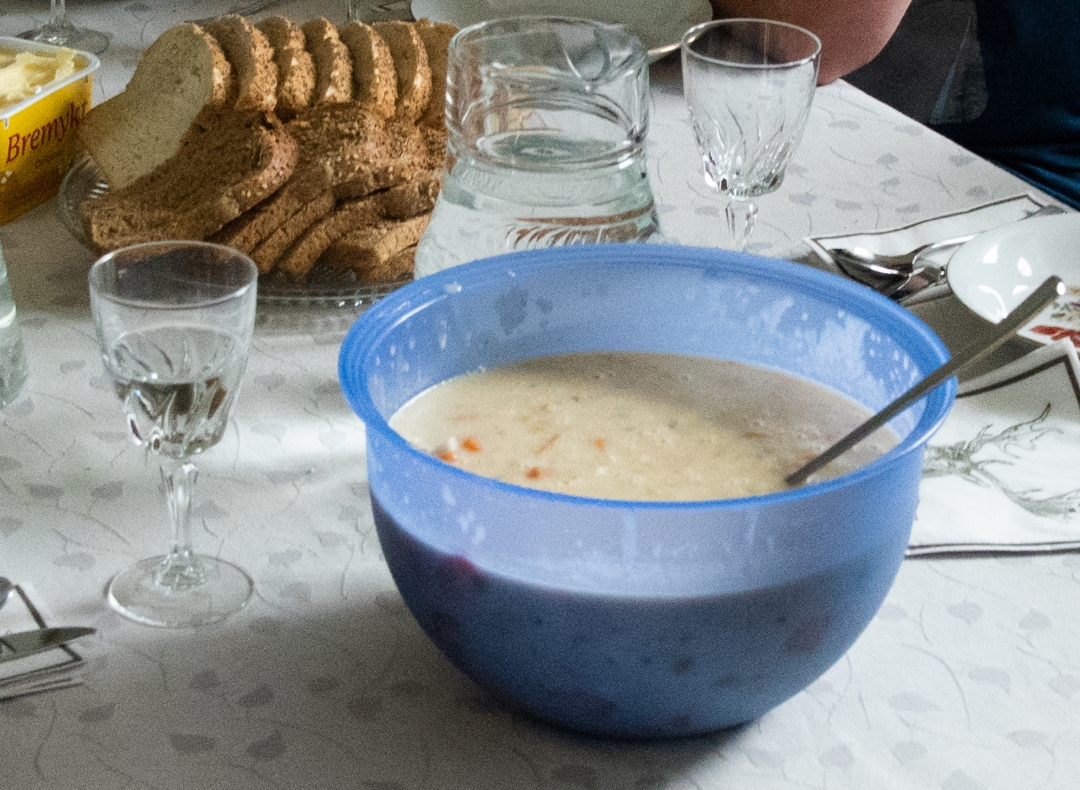 I was getting ready to leave my Norwegian cousins’ house after a day of exploring the country of my ancestors when they stopped me and said I couldn’t leave without first having dinner. I graciously accepted their offer and made my way to the dining-room where I saw an empty bowl on the table in front of me. When I asked what was for dinner, the reply was “fish soup.”

My first thought was “what an interesting combination fish and soup is, but who am I to judge?” I then began to wonder if the fish would be grilled, fried, sautéed or baked, and what kind of soup does one serve with fish?

Obviously, I had never heard of fish soup before and was shocked when they told me the fish would be IN the soup. For as long as I can remember I have eaten fish steamed, fried, grilled, baked, sautéed, and even raw but never, before coming to Norway, had I heard of fish soup. Since eating fish soup for the first time with my cousins, I have had it two more times and each time it was slightly different but still delicious.

The first fish soup I had was homemade with salmon and vegetables in a rich and creamy white broth that resembled the broth of New England clam chowder. It was served with both white and whole grain bread.

I am not sure of how the second fish soup prepared, but it was served from a crockpot in the dining room of a ferry, en route to the mountain town of Flam. It, too, had salmon chunks and vegetables, a rich, white broth and was served with bread. But it differed from the fish soup served at my cousins’ house because it included shrimp. While it was very good, it wasn’t quite as good as the homemade fish soup I’d eaten just the day before.

At this point, I was beginning to think that all fish soup consisted of fish in a white broth, perhaps with some shrimp. But in Flam I found out just how wrong this assumption was.

We had lunch at Ægir, a brewpub in Flam, and I ordered the fish soup. But this was unlike any fish soup I’d ever had before it. Yes, it still had salmon and shrimp with vegetables – just like the fish soup on the ferry – but it contained mussels and, even more surprising to me, it was served in a tomato-based broth. While it was excellent, it lacked the very rich flavor I had come to expect when eating fish soup and left me wanting something more.

While I highly recommend fish soup to anyone who has the chance to try it, especially in Norway, I suggest you ask the server if it is served in a red or white broth.

I am currently a student at Abraham Baldwin Agricultural College and will graduate with a degree in Writing and Communications in December 2019. I have completed an internship in Norway working as a journalist, photographer, and videographer during the summer of 2018 and am working during the summer of 2019 as an associate producer on a documentary about naturalistic technology. I have also done some freelance video work ranging from filming and producing corporate testimonials to teach a youth film camp. View all posts by Jessie Shiflett