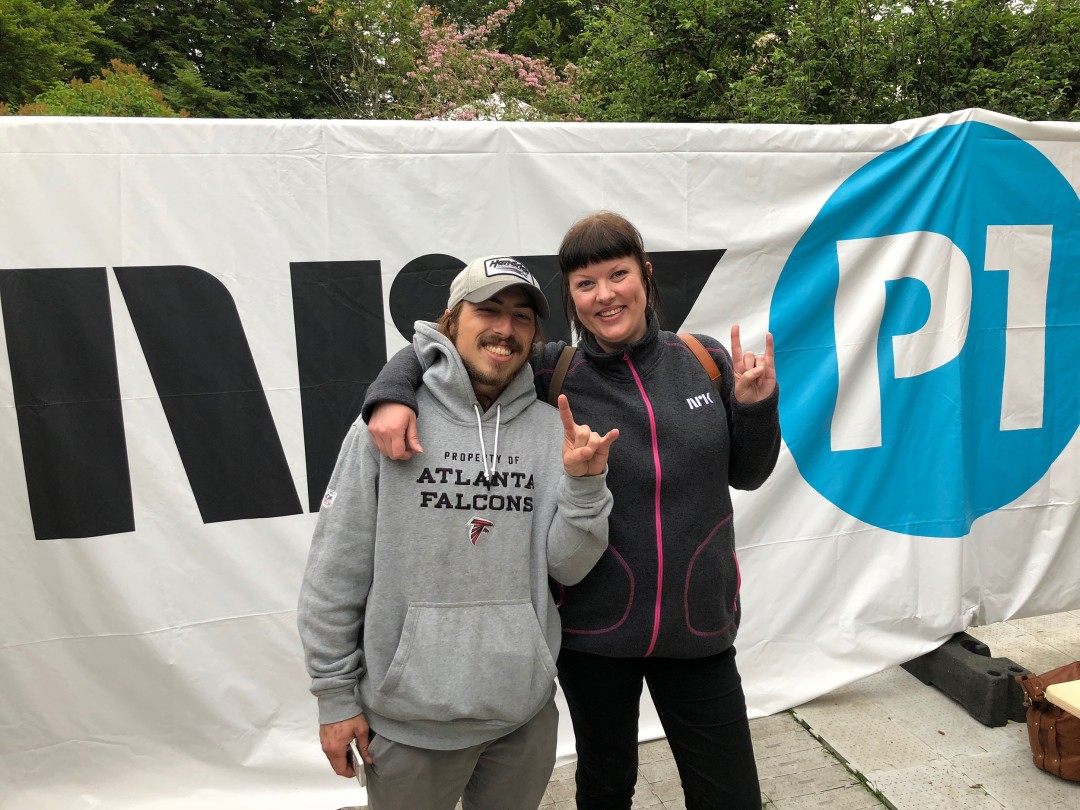 NRK P1 music reporter Hilde Zahl scanned the crowd at Bergenfest – the annual music festival in Bergen, Norway – and spotted a woman wearing a Nick Cave and the Bad Seeds tee shirt. Zahl walked right up to the woman, crossed her ankles, dipped into a curtsy and, without skipping a beat, extended her phone to record the interview and began to ask questions

Watching this, I whispered my thanks to the universe for leading me to the NRK P1 press tent and talking my way into shadowing Zahl for the day. NRK is Norway’s government run public broadcasting company. P1 is one of several radio stations, each with its own focus. The U.S. has nothing comparable: our National Public Radio (NPR) is funded through listener donations and commercial radio is funded by advertising. When you flip through the channels of Norwegian digital radio, you’ll find that there aren’t any commercials because it is funded through a special tax on televisions.

During the first week of a journalism study abroad program in Norway, I took a Norwegian language class. The instructor cautioned the American students in the class that walking up to Norwegians and talking to them can be awkward. The American tendency to smile at strangers on the streets makes Norwegians uncomfortable. I recalled my instructor’s words when Zahl asked that I stand away from the interviews so I wouldn’t scare people away.

Zahl’s trademark pre-interview curtsy and bubbly personality helped break the ice and disarm her interview subjects. She said using a phone bothers people less than a microphone in their face.

NRK P1 covers Bergenfest and similar festivals to expose listeners to acts such as Sparks and Nick Cave and the Bad Seeds. Zahl said 40% of the country tunes in for their 6:30 to 9 p.m. show every night.

Nick Cave refused doing any interviews with press, as he has been known to do in the past. “If the musician won’t talk to me, I will build my story by talking to the fans,” Zahl said. After a dozen interviews with Nick Cave fans,  Zahl had everything she needed to prepare her four-minute package. She went back to the press tent and quickly prepared the package.

Before heading out for more interviews, Zahl prepared for an upcoming interview with the band Sparks, whose frontmen Ron and Russel Mael are happy to talk with reporters.

Sparks manager Sue Harris had warned Zahl that reporters in the past have frustrated the Mael brothers by having little to no knowledge about their band. With extra zeal, she plunged into her research, listening to Sparks albums and becoming something of an expert about the band in less than two hours.

Due to my lack of a backstage press pass I couldn’t sit in on Zahl’s interview. But I watched when she returned to the tent and efficiently pieced together the package in time to air on the show.

At the end of the two-hour show, the P1 team smiled as they packed up their gear.  They huddled together under the Bergenfest sign for a group photo. One of the producers handed me a Canon 35mm camera, a camera with which I am not familiar and asked me to take their picture. The pressure was intense as I aimed the lens at six professional journalists/photographers who, I was convinced, were silently judging my skills. Perhaps because I am still a journalism student and rookie photographer, they politely suggested I take more than one shot. I didn’t capture the full sign in my second picture, so I was sent back to try again.  After successfully taking their picture with the full sign in the background, one of the reporters said, “the third time is the charm!”

View all posts by progressiswork10