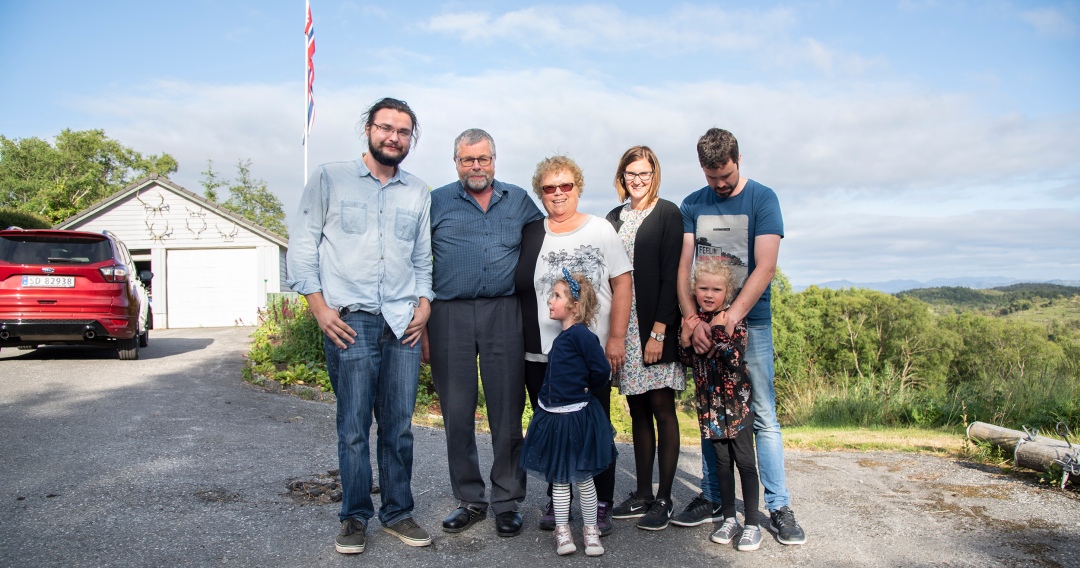 The long road to my Norwegian family

It was noon as the car pulled into a gravel drive in Sveio, Norway. The GPS had led us to a house atop a small hill overlooking a sheep farm in the Norwegian countryside. Not one of us in the rental car knew what the people we sought look like, nor did we know if we’d even found the right house. The car came to a stop and we got out. Armed only with an email from great-great aunt Helen, we walked up to the large wooden door and knocked. This is it, I thought to myself, there is no turning back now.

After a few moments, the door opened and a woman wearing a confused expression appeared in the doorway, speaking Norwegian. We quickly explained we were Americans who only speak English and were looking for my relatives. I had no idea if this woman was a family member, nor did I know how to pronounce the names listed in the email. I handed my phone to her and pointed to the e-mail. It probably only took a few seconds for her to respond, but it felt like many minutes. As soon as she saw the names of my Norwegian relatives, Hans-Einar Grimstvedt and Solveig Grimstvedt, she immediately exclaimed, “Oh, I know these people! Is this who you are looking for?”

I said yes and another woman appeared behind the woman still in the doorway. While one gave us directions to my family’s house, the second woman gestured with her hands and arms. “Head back down the drive, turn left onto the main road, keep going until you get to the cross in the road, then to turn left and keep going until you see yellow flowers, and the house and drive will be on the right.”

We thanked the women and made our way to the car. Suddenly remembering that I don’t know how to pronounce my relatives’ names, I paused long enough to ask the first woman how to say their names. Looking amused, she sounded them out for me. I thanked her again and ran to the car saying the names over and over in my head.

We turned the car around and made a left at the bottom of the drive. Soon we came to a four-way intersection with a roundabout. In an attempt to follow the woman’s directions, we circled the roundabout and headed left, but in less than a minute we were pretty sure we had made a wrong turn and were lost again.

We looked out the windows at ditches and fields full of yellow wildflowers, but there was no drive or house to be seen. Had we gone the wrong way at the roundabout, or somehow misunderstood the directions? Just then we spotted an elderly couple weeding their fence-line and walked over to ask for directions.

The man glared at us as we approached and didn’t say anything when we explained we were lost and looking for my family. Unsure if the man didn’t trust us or didn’t understand us, I again handed over my phone with the e-mail and asked if he recognized the names. After looking at the e-mail he said in a deep, gravelly voice, “Hans-Einar lives up there” and pointed to a large house behind us, three-quarters of the way up a massive hill. Again we said our thanks, climbed to the car and and headed in the direction he indicated.

When we got to the bottom of the hill, we all laughed when we saw two small planters with bright yellow flowers on either side of the the drive and a sign with my relatives’ name and address on it.

As the car went up the drive I told myself, “This is it, for real this time. I’m about to meet my cousins, the descendants of my great-great grandfather’s sister who stayed behind in Norway.”

In 1911, my great-great grandfather, Hans Bjordal, left his family and home in Norway at the age of 19. He and his brothers, Helge and Ole, were three of the roughly one million Norwegians who came to America between 1820 and 1920 in search of a better life.

While Hans Bjordal was supposed to inherit the family farm, he and his father are rumored to have had an argument that prompted him to follow his brothers to America, leaving one of his three sisters to inherit the family farm. While no one in my family seems to remember what the argument was about, it wasn’t severe enough for the Norwegian branch to lose contact with those who emigrated to America and settled in South Dakota. Because the family stayed in contact for the next one hundred years – via post cards in the early 1900s and email in the 2000s – my great-grandparents were able to visit the family in Norway in 1991. However, no one in my parents’ or grandparents’ generations has made the trip since, and I was the first of my generation to visit Norway. All I could think as the car went up the drive was, “How lucky am I?”

As the car rolled to a stop, my companion looked at me and said, “This is it.” As I opened the car door and walk up to the front door it hit me: there was still a chance this wasn’t the right house, or they may not have gotten my e-mail saying I would visit. Again I pulled out my phone with great-great aunt Helen’s email, but before I could open the email, the front door opened and a woman emerged and walked toward me.

I started to say “Hi, my name is Jessie…” but before I could get the words out she exclaimed, “Oh, you’re Jessie from America!” In that moment a wave of relief and shock washed over me all at once. I really had found them, but now what?

The woman who recognized me is my cousin Solveig Grimstvedt and she wasted no time inviting me in, and telling me her husband Hans-Einar Grimstvedt was in town but she would call him to come home as soon as we got inside.

Upon entering the house, Solveig directed us up the stairs to the living room and stepped off to call Hans-Einar. When she returned, I explained that Marjie (88) and Leonard (90) Lindsay are my great-grandparents. She immediately began to tell me all about their visit in ’91, asking how they were doing and if Leonard still fishes every chance he gets. I explained Papa, Leonard, doesn’t get to fish as much as he’d like to these days. As we settled into the living room, Solveig pointed out a ceramic plaque that my Mema, Marjie, made to commemorate the birth of their son Hans-Christian. I told her that Mema sold the ceramics shop a several years ago, but would be happy to know her work is still appreciated.

Before long Hans-Einar arrived and immediately greeted me. He said he doesn’t speak much English and disappeared into another room, only to return a minute later with a stack of photo albums, pictures and old post cards, some of which had been sent from our family in South Dakota. As we went through the family photos, Hans-Einar and Solveig asked about my visit to Norway.

Explaining that I was part of a journalism study abroad program for the entire month of June, and that sadly I would not be able to see them again as I had to cover a music festival in Bergen the next day before I returned to Oslo the the following day. It had been lucky that Bergen, Norway’s second largest city, was just a few hours’ drive from Sveio.

Shocked that we’d only have the afternoon together, they offered to take me on a tour of the area. I responded with an immediate “yes” and, before I knew it, we were on the road to my ancestors’ home. In the space of an afternoon Hans-Einar took me to meet their son, Hans-Christian, to see the old family farm, a nearby city, and a monument at an old battleground.

We stopped once on the way to the old farm to meet Hans-Christian, who is fluent in English and could act as translator for us. It was quiet until we got to the farm. Then Hans-Einar showed us a map of the area, and told us that the old farm is five kilometers (about three miles) from where we had parked.

During the five-kilometer walk, Hans-Einar explained that, back when the family lived on this farm, the closest store was seven kilometers (4.35 miles) away, and that most of the goods they bought were sold in bulk, with the heaviest bags weighing as much as 100 kilos (220.46 lbs.). The family didn’t own any draft animals and carried their supplies up the mountain on their backs.

When we finally reached the site of the old farm I was surprised to see all but one of the structures were standing and in immaculate shape, despite being vacant. In answer to my questions, my cousins told me that the people who now own the property had fixed up the buildings that were still standing and rent them to the hikers who traverse the trails that cut through the mountains.

As we made our way to the back of the property, Hans-Einar pointed out the root cellar, where they stored all the vegetables they grew – most of which were potatoes. After walking through the cellar, we made our way around to the front of the house which overlooks the valley we had just hiked through. The view was, by far, one of the most beautiful things I have ever seen. I immediately, and without thinking, asked, “How could anyone leave behind a house with a view as incredible as this?” Hans-Christian agreed it was beautiful, but told me, “You can’t feed your family and live off a view.”

Now that I have had time to reflect, it seems ironic that the farm and view which could not sustain my family more than 100 years ago had been transformed into a property that now makes money for its owners by sharing that view.

Photo gallery: More pictures from the quest to find family

I am currently a student at Abraham Baldwin Agricultural College and will graduate with a degree in Writing and Communications in December 2019. I have completed an internship in Norway working as a journalist, photographer, and videographer during the summer of 2018 and am working during the summer of 2019 as an associate producer on a documentary about naturalistic technology. I have also done some freelance video work ranging from filming and producing corporate testimonials to teach a youth film camp. View all posts by Jessie Shiflett

One thought on “The long road to my Norwegian family”